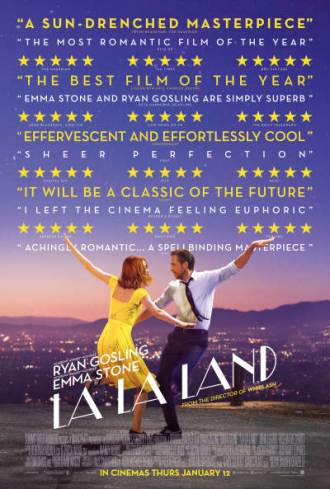 I’ll keep my review brief and direct you to Zer’s review if you require more analysis and plot details. There’s a broader conversation happening around this film, that I’d like to take the opportunity to address.

But first, my review: This homage to the classic Hollywood movie musical is an absolute delight, and it arrived at a moment in time where that’s exactly what we all needed. It’s beautiful, joyful, wistful, whimsical, and the stuff of dreams for anyone who’s spent hours spellbound by the performances of Gene Kelly, Debbie Reynolds, Danny Kaye, Ginger Rogers, Fred Astaire, and I think you get my point…

If you don’t walk away from this movie with a smile on your face, you have my utmost sympathies. Now, onto the controversy (yes, we live in a world where a happy movie musical has become controversial…let that sink in).

“La La Land” has done very well this award season. It tied the record for most Golden Globes and has continued to do well at the SAG Awards, the BAFTAs and you get the picture… A lot of people are not happy about it. Here’s why: Many of the other Best Picture nominees tell more “important” and “timely” and “relevant” stories. “Moonlight,” for example is the coming of age story of a gay, black man. It’s the kind of story that changes minds, and sheds light on people who have been forgotten on the periphery of society. It is an important story, but here’s where I take issue:

I have no objection to the people who believe that “Moonlight” or any of the other nominees should win Best Picture. They’re all incredible films, and worthy of the honor. But a lot of this conversation has crossed over into shaming people who enjoyed “La La Land.” That’s crossing a line.

Frankly, the concept of judging any of these films against the others is a ridiculous proposition. They could not be more different, and that’s a good thing. Every movie can’t be everything to everyone and expecting it will end in a whole lot of disappointment. Do we need more diverse representation in Hollywood?  Yes. So rail against the establishment, let your voices be heard by the Academy, but please, don’t direct the rage at a song and dance number and the people who dared to enjoy it. I would venture to guess that many a person appreciated and even enjoyed all of the Best Picture nominees this year (I include myself in that group). Liking one does not equal ignoring the others.

Now, there are people out there, who genuinely did not like this movie, and I accept that. Apparently, Ryan Gosling looks at his feet too much (didn’t notice) and Emma Stone’s singing voice isn’t especially strong (really?). I don’t agree with you, but you are entitled to your opinion.

Art can teach us, change us, and when we need it, provide an escape. The true beauty is, you get to decide.