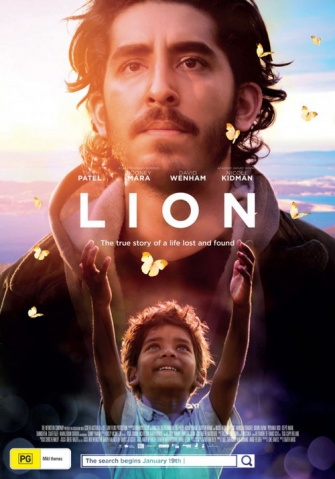 Class, language, and hundreds of miles separate young Saroo (Sunny Pawar) from his family in India after he is separated from his brother at a train station. “Lion” is truly an extraordinary story about the (almost) unbelievable journey of young Saroo, and the most astonishing part is that it’s true.

So much of this movie is absolutely heartbreaking to watch: Saroo trapped on an empty train carrying him further and further away from his family, unable to communicate with those he encounters as he doesn’t speak the local language. He is ignored, abused, and nearly captured on several occasions.

Sheer determination, courage, and a lot of luck deliver Saroo to an orphanage where he is adopted by an Australian family (Nicole Kidman and David Wenham).

Sunny Pawar who plays young Saroo will make you laugh, cry, and wonder how this kid did not get nominated. His first timid encounters with his adoptive parents are truly touching, and make it clear why Nicole Kidman did get nominated (as well as a rather amazing scolding towards the end of the movie).

Shortly after Saroo is adopted, this film reaches a large and necessary shift, jumping 20+ years to adult Saroo (Dev Patel) who is happy, but struggling with phantom memories of the family he left behind. Enter Google Earth where Saroo begins to obsessively search for the train station he was lost at, with only the memory of nearby water tower to guide him.

The second portion of the film, while still an impressive story, did not flow as well as young Saroo’s journey. The long, pensive silences as Saroo lost himself in this task were understandable, but a bit heavy-handed for an audience who had just witnessed the entire journey minutes earlier. But I admit, those are small squabbles compared to the story of human triumph and family that “Lion” shares with us. Bring your tissues, and prepare to be inspired.