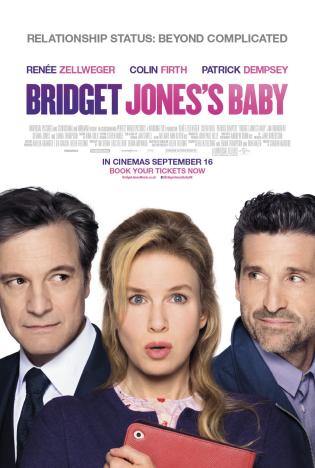 Before I get started with my review of, “Bridget Jones’s Baby,” I’d like to make a few obvious, but necessary, statements. First, this is a “Bridget Jones” film. Second, if you watched the first two films and did not enjoy them, you probably won’t like this one either. Third, and last, if you had no desire to see the first two films (you missed out) and you probably shouldn’t see this one either.

Okay, now that I’ve gotten that out of the way.

My fellow “Bridget Jones” fans, this one was worth the incredibly long wait. For those who haven’t been keeping track, “Bridget Jones: The Edge of Reason,” was released in 2004. That’s over 10 years ago, and way too long, but I digress.

The important thing is finally, Ms. Jones gets the finale she deserves.

The film opens with Bridget (Renée Zellweger) once again celebrating her birthday alone. At 43, she’s learned to embrace her single-hood with a little less self-pity and wallowing. Although, that doesn’t mean she’s not still looking for Mr. Right.

When her friends ditch her for family emergencies, she takes off for a girls weekend with one of her work friends (Sarah Solemani). The end result, plenty of Bridget’s signature, “graceful” moments and a one night stand…also a result of Bridget being Bridget.

A week later, she has a repeat episode when she runs into her ex, Mark Darcy (Colin Firth) at a christening. As luck would have it, they’re both the god parents.

Determined not to fall back into old habits, she puts both men behind her, that is until she discovers she’s expecting. What follows is a delightful and sweet competition between the two possible fathers and Bridget who once again can’t seem to make up her mind.

I won’t spoil anything for you, but the film does a good job of keeping the same Bridget charm without feeling like you’re watching a slightly less entertaining version of the first and second films. It feels fresh.

What the film gets incredibly right, is it doesn’t dumb Bridget down. I was prepared for a 40-something Ms. Jones who couldn’t tell a tweet from snapchat. What the film delivers is a Bridget who has kept up with the technology, and can keep up with the social media savvy millennials, even if she does have a “Bridget” moment or two.