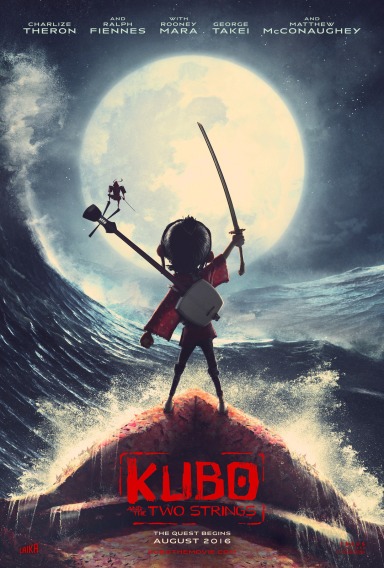 There are few storytellers as consistently excellent as the folks at Laika, and their latest tale “Kubo and the Two Strings,” a story about stories, showcases that strength in a new, touching as always, light.

Kubo’s story (told by Kubo) starts in the blink of an eye, with his mother. In this tale, the lines between the fantastic and the familiar are blurred nearly from the start, but what happens here is a beautiful beginning for some truly spectacular storytelling.

Kubo’s mother, fleeing an unseen assailant, is thrown from her small vessel, dashing her head on the rocks beneath the waves. It’s now we see Kubo, an infant, separated from his mother and washed up on the shore, and wounded himself.

Fast forward a few years, and we see Kubo (Art Parkinson) has grown into a dutiful son, who cares for his mother each morning and evening. His mother is distant with moments of lucidity after the head trauma of many years ago. Kubo is patient, kind, and eager for her stories of his father, Hanzo, which she tells during her more lucid moments.

During the day, Kubo ventures to the nearby village where he tells the stories his mother has shared while bringing them to life with incredible feats of magical origami. But much like his mother, he’s never able to finish those tales. When sunset comes, he’s forced to return to the cave, to escape the sight of his grandfather the Moon King (Ralph Fiennes), whom his mother fled all those years ago.

Tragically, Kubo learns the full ramifications of flouting that rule and finds himself on a quest with a Monkey (Charlize Theron) and a Beetle (Matthew McConaughey)…

And that’s all I can tell you without some major spoilers.

What I can tell you is this is a beautiful movie in every way. As always, Laika’s stop-motion animation is stunning and the story is just as intricate, spinning a story that unfolds like an ancient text, but is in truth a completely new, original story (Shannon Tindle & Marc Haimes).

And as the summer comes to a close, this film is a high point for all audiences that I cannot recommend highly enough. (Along with all other Laika films…seriously check them out.)