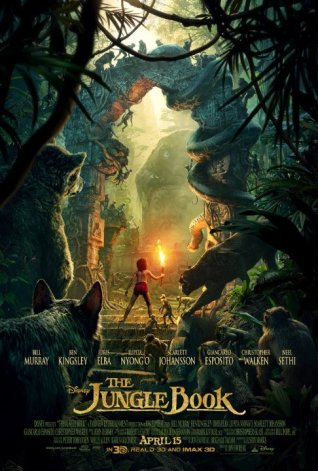 In Disney’s latest incarnation, director John Favreau has turned “The Jungle Book,” into a work of art.

The world inhabited by Mowgli (Neel Sethi) is a lush, green, beautiful place. It’s heart breaking to think that not a bit of it is real.

The film seamlessly integrates the man-cub into a completely animated world. From the lighting to the incredibly honest performance of the young Neel Sethi, it’s impossible to distinguish the line between reality and the imagined world created by the digital animation gods at Disney…and what a world it is.

Filled with talking (and singing) bears, majestic elephants, charming pythons, and killer cats. “The Jungle Book,” has everything fans of the original film love, and then some.

Another thing this new interpretation gets right, it doesn’t shy away from the darkness. In fact, thanks to its incredibly realistic animation, Shere Khan (Idris Elba) is even more frightening, and Kaa (Scarlett Johansson), at least twice as sincerely scary. And don’t even get me started on King Louie (Christopher Walken). The lovable primate has been transformed into a godfather figure, with a much larger stature.

Even the good guys get a nice dose of reality, with Baloo (Bill Murray) and Bagheera (Ben Kingsley) both obvious serious forces of nature. It’s a very real world, where our hero, Mowgli, is in constant danger of falling prey to the food chain.

Of course, it’s not without its charms. Baloo is still more closely related to Pooh than the bear from “The Revenant.” Especially when he’s enjoying a leisurely swim and jazzing up “The Bare Necessities.”

If the film has any flaws, most are forgivable, with the exception of the awkward lead into “I Wanna Be Like You.” It’s a classic, and I completely understand why it was included. However, it feels a little out of place in the new revamped world with the reimagined (and slightly terrifying) King Louie.

Still overall, it’s a great film. With its stunning sets, and incredibly lifelike animal characters, it’s worth seeing in theaters (I’ll even recommend 3D for this one). Fans of the original film will appreciate the loyalty to the original film, while those new to the story will instantly fall in love with this retelling of the classic.