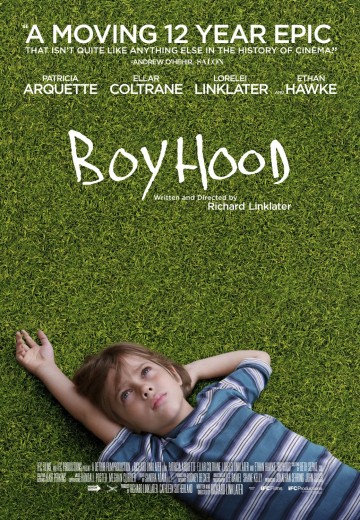 The making of “Boyhood,” is an impressive story by itself. The story may be small, but it’s told on an epic-scale. 12 years is a long time to dedicate to one story, and tell it with one cast, and film over 12 years, well that’s no small feat.

Director Richard Linklater’s film focuses on the childhood of Mason Evans (Ellar Coltrane), but it’s more than just his story. Children of divorce, Mason and his older sister, Samantha (Lorelei Linklater) are raised primarily by their mother (Patricia Arquette).

While the film’s title “Boyhood,” is not completely inaccurate, it could also just as easily be called “Childhood,” or “Family,” because that’s what this movie is really about. While Mason is definitely the main protagonist of the film, we also see his family grow and change throughout the 12 years, too.

For example, Mason’s mother, Olivia, for example goes from a struggling single parent, to a successful university professor. Mason’s father, Mason Sr. (Ethan Hawke), goes from an aimless “musician,” to a stable family man, with a new wife and a young son.

While Mason may be the main character, for most of the film he’s an observer. First, as a quiet 6-year-old who doesn’t understand that he doesn’t just have to do his homework, he also has to turn it in. Then, as a quiet tween, who has enthusiastic, nerdy conversations with his father about whether there are actual elves in the world, and whether there will be another Star Wars film. Finally, as an awkward, but insightful teen who sees most of the world through his camera. He witnesses the other characters transformations, and by the end of the film, it feels like his story is about to begin.

It’s a thought-provoking take on a story that we’ve all lived through some version of. It’s made all the more impressive by the cohesiveness of the storytelling. You would never know that the four main characters didn’t actually grow up together. There’s a genuine quality to all of the acting and life events that makes you feel like you’re a part of this family, too.

It’s a simple story, told on an epic scale, and definitely worthy of its Oscar nomination.