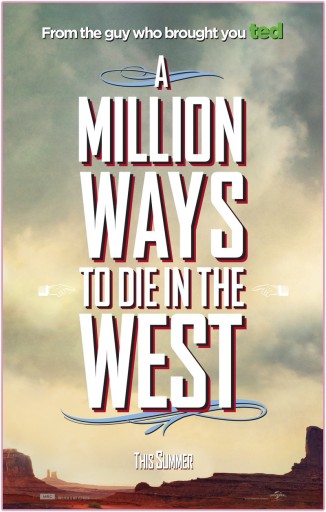 This Thursday I thought I’d continue my summer of bro-comedies (by coincidence, not choice, but I’m enjoying it more than expected) with a gunslinger of a tale from the mind that brought you “Ted”, and the most inexplicably ill-received hosting of the Oscars ever.

Seth MacFarlane’s “A Million Ways to Die in the West” is a bizarre, but often delightful blend of clever, quick, and sometimes crass humor.

As the opening credits role, you’re hit with a wave of nostalgia as a classic (but original) Western score hits you right in the heart. As the camera takes in all that the Great American West has to offer, we get to experience the musical romance of the western.

Then we meet Albert, and his strangely modern sensibilities.

Our “hero” Albert (MacFarlane), is a sheep farmer (yeah, technically that makes him a shepherd, don’t dwell on it) stuck in the wrong place in time (not literally, although a cameo from a certain DeLorean certainly makes that possible).

As we begin our story, he’s just talked his way out of a gunfight, and been dumped because of it. He absolutely hates the American frontier. Generally, Albert is all too aware of all of the things that absolutely sucked about living on the frontier. One of the movies best moments allows him several minutes of ranting on those million ways to die, and it is epic. What remains is a series of gags playing off of that epic rant. Some of these gags are absolutely hilarious; others not so much.

You (or I did at least) get the strong impression that this movie was born out of a conversation Mr. MacFarlane had at some point, probably trying to convince a friend that living in a western movie would suck. Not a horrible premise, and if this movie were about a half hour shorter, that totally could have worked, but as is it does start to drag towards the end.

The cast and the score are absolutely amazing though, and I can only presume that with this incredibly talented cast including the musical talents of Neil Patrick Harris, Amanda Seyfried, and Seth MacFarlane himself, that there is an epic song and dance number sitting on the editing room floor. Don’t get me wrong, the mustache song was fun, but it didn’t quite hit the spot.

But did I mention the score? This is the stuff of western film buffs’ dreams. It wonderfully sets the mood, that is then trampled on by modern sensibilities, but that’s kind of the point.

It’s raunchy, rude, and irreverent at times, but it’s also a lot of fun, and even sweet at moments. It won’t be taking home the Oscar, but it’s a pretty fun way to spend a couple of hours this summer.