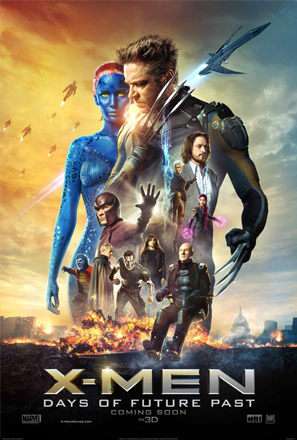 It’s hard to believe that it’s been 14 years since the first X-Men movie was released, but for a couple of the missteps (Wolverine, you know what you did), it’s been a pretty fantastic ride.

The latest, “X-Men: Days of Future Past,” is by far the best of the series. I realize that’s a bold statement, and I acknowledge that this story couldn’t exist without its predecessors, but it really is that good.

“X-Men: Days of Future Past” opens not so far into the future, in a world that has turned on, and all but destroyed its mutant population. They few who have survived, which includes Wolverine (Hugh Jackman), Storm (Halle Berry), Iceman (Shawn Ashmore), and Kitty Pride (Ellen Page), are outsmarting the mutant hunting droids with some help from their mutant-ness.

Let me explain: Each time they’re attacked, Kitty sends the consciousness of one of their crew back to just before the attack so that they can get the heck out of dodge before the attack ever happens. Awesome, right?

They soon meet up with the also still living Professor X (Patrick Stewart) and Magneto (Ian McKellen) who have the brilliant idea to use this plan to go way back in time and stop the war from ever happening.

That, is what we like to call some timey-wimey magic.

The story, though slightly altered (I’ve come to peace with the Shadowcat/Wolverine swap out), is straight out of the comics and brilliantly ties the two casts together and what a giant, talented cast they are.

Wolverine and Mystique may inhabit the majority of the poster, and Jennifer Lawrence and Hugh Jackman are wonderful in this film, they are, but they’re not the best part of the film. Although her character’s role got a major downgrade from the comics, Ellen Page as Kitty Pride (aka Shadowcat) is still amazing. Her character is vital to the central conceit of this story and she owns it.

Then there’s the cross generational frenemies, Professor X and Magneto. I’ll assume that anyone who found this post is very familiar with the bromance that is Patrick Stewart and Ian McKellen. So, their onscreen chemistry is just what it’s always been, fan-freaking-tastic.

That brings us to their younger-selves: James McAvoy and Michael Fassbender. We’ve already seen them together in “X-Men: First Class,” but that time around they were friends. This time around there’s some tension, and they’re both wonderful. Mr. McAvoy’s anguish as he accepts his fate and Mr. Fassbender’s slight madness as he does that same, are just breathtaking.

Not one out of the four will ever be nominated for these roles and that’s a pity, because great acting is great acting (and that goes for storytelling too). So, I hope I’m wrong, but regardless, these are great performances.

Finally, if you can, see this in 3D. The whole film is amazing, but Quicksilver’s (another phenomenal character, played by Evan Peters) scene is worth the price of 3D alone. You can thank me later. Enjoy!