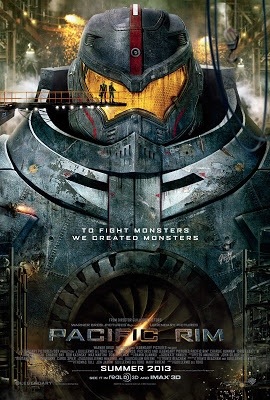 In many ways Guillermo del Toro’s “Pacific Rim” is a text book big budget Hollywood summer blockbuster. It has huge monsters, the Kaiju, from another world, and even bigger giant humanoid robots, the Jaegers, to fight back.

That alone would be enough to make this a satisfactory popcorn picture, but it turns out this film has a compelling plot too.

Set in the 2020s, the world is under attack from a cousin of the dinosaur called the Kaiju.

Humanities response to this threat is the Jaeger, and this is the point where the plot gets interesting.

Due to their enormous size, these humanoid robot warriors are operated by two pilots. These pilots are joined by a neural bridge, and move in perfect unison and with one mind.

It’s an interesting concept and makes for more than a few compelling moments.

And in the end (spoiler alert) the Jaegers, in spite of insurmountable odds, save the world.

It’s not the greatest movie of all time. It probably won’t be nominated for a best picture Oscar, but if you’re a fan of sci-fi and good story telling, this one is worth a trip to the cineplex.