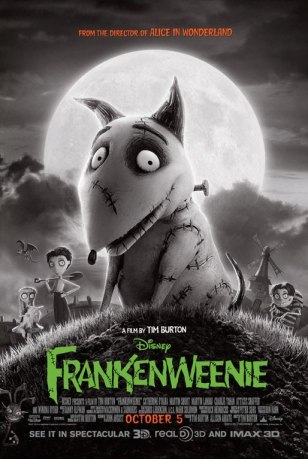 The latest stop action film from Tim Burton, “Frankenweenie,” offers plenty of humor, fun, sweetness and a bit of the same.

Those who checked out “ParaNorman” earlier this year may find themselves with a bit of deja vu. Both are beautifully executed stop action films, plus the stories are eerily similar. Despite their similarities “Frankenweenie” has plenty to offer on its own.

Young Victor Frankenstein (Charlie Tahan) and his beloved dog Sparky (not a dachshund…so where does the weenie come from?) live in the bizzare, idyllic suburban town of New Holland.

When Sparky meets his maker, Victor—a not so ordinary boy— constructs a laboratory in his parents’ (Martin Short and Catherine O’Hara) attic. And with his mother’s waffle iron and a few other gadgets, he brings Sparky back to life.

The kooky residents of New Holland just don’t know how to deal with undead. Some are a little too excited and others just panic, which makes for some interesting encounters.

This being a kids movie, Sparky does not go on a killing rampage, and the moral issues behind what Victor has done are only briefly and humorously touched on.

It gets a bit preachy at times. There’s a rather sizable amount of the film dedicated to the importance of science and the dangers of ignorance. Which is an important message, but it bogs the film down a bit.