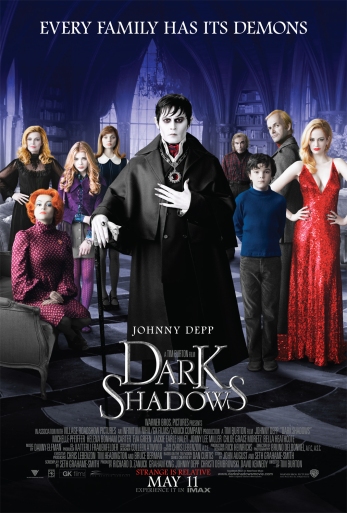 I admit that my knowledge of the original incarnation of “Dark Shadows,” a 1960’s television show for those who don’t know, is limited to that of its existence and apparently low production value.  So, there’s your grain of salt “Dark Shadows” enthusiasts.

Therefore, the bulk of my expectations of Tim Burton’s “Dark Shadows” starring (of course) Johnny Depp rested on the previous collaborations between these two.

This time ’round their Gothic tale is one of vampires.  Specifically that of Barnabas Collins (Depp) who because of his true love for Josette (Bella Heathcote), which followed his ill-chosen lust for Angelique (Eva Green), was cursed by the latter (who was and is of course a witch).

Along with his formerly affluent family, Barnabas befalls tragedy after tragedy ultimately bringing him to the ultimate state of desperation.  When Barnabas tries to escape his misery (use your imagination) Angelique  transforms him into a vampire, trapping him in his world of suffering and eventually a sealed coffin.

Fast forward several centuries to the 1970’s and the Collins family persists.   With current matriarch Elizabeth (Michelle Pfeiffer) at its head, they are hanging by a thread when Barnabas (recently released from his tomb by some unsuspecting and short-lived construction workers) returns to save the day.

Meanwhile Angelique is still trying to destroy Barnabas and his family.  In the interim, Barnabas makes some questionable decisions which go completely against his apparent character and are cited as results of Angelique’s “control over him.”  Weak.

Needless to say, there’s a lot going on and I haven’t even thrown in irrelevant spoilers.

What starts out as a well constructed story dissolves into a mess of funny bits and inconsistent character choices all strung together by too many plots to keep track of.   Somehow it still manages to be entertaining, a feat which I believe can be mostly attributed to Mr. Depp.  As Barnabas he is exactly what we’ve come to expect from him, charming and well-timed.  On that front you will not be disappointed.

However, fans of a satisfying story may leave a little less than fulfilled.  This movie is too quirky and off-the-cuff for its own good.  If you’re going to be off-the-wall random you have to commit to it.  You can’t make sense one second and then throw a curveball at us the next.  This is true of any genre, even fantasy.  I daresay especially fantasy.  Your invented world and the characters who inhabit it must make sense or we won’t follow or care enough to try.

Now, that I’ve got all of that off my chest I must give props to the villain of this piece.  Angelique is the one character who makes complete and total sense at all times.  We know why she does what she does, even if it is a little bit evil.  Her actions are consistent and explained and Eva Green is bad-ass and brilliantly sadistic in her performance.  Well done.

In spite of its plot and character shortcomings I can’t say I didn’t enjoy it.  It’s an entertaining couple of hours and if you can forgive character inconsistencies (only for Johnny Depp) it’s not a bad way to spend a summer afternoon.