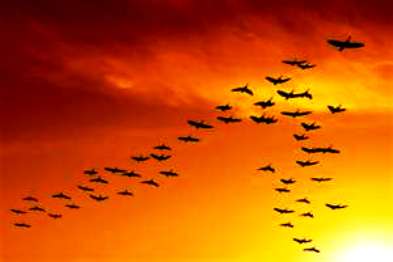 For years these pests have been crossing our borders without repercussion.  They invade our parks and other public spaces.  They clog up roadways, terrrorize small children (and not so small children), and even taken down a plane.

Until now, we’ve accepted their existence, and even fed them on occasion. Now it’s time for them to return the favor.

The tiny terrorizer of which I speak is none other than the Canada goose.

Shortly after a flock of them took down a plane in the infamous 2009 Hudson River landing, New York instituted a strict population control policy.

In the past, the geese have taken a short trip to the local landfill. However, now these geese will be paying it forward at local food banks.

Yes, that’s right. They’re feeding the geese to the homeless.

The excess will be sent to other food banks such as the overly excited Pennsylvania soup kitchens, who apparently already have a killer Canada goose recipe (no joke).

Despite the gross out factor for those of us who aren’t fans of goose meat, this paying-it-forward project teches some valuable lessons. One man’s road kill is another man’s meal, and flying your flock of geese into a 747 is a very bad idea.